Today over 250 Bulawayo Christians and pastors from various denominations, groups and affiliations converged a a City Church to discuss the National Pledge that the state is imposing to school going children as of the 3rd of May 2016 which has been described by activists and church leaders as a violation of the freedom of conscience espoused in Section 60 of the Constitution of Zimbabwe. 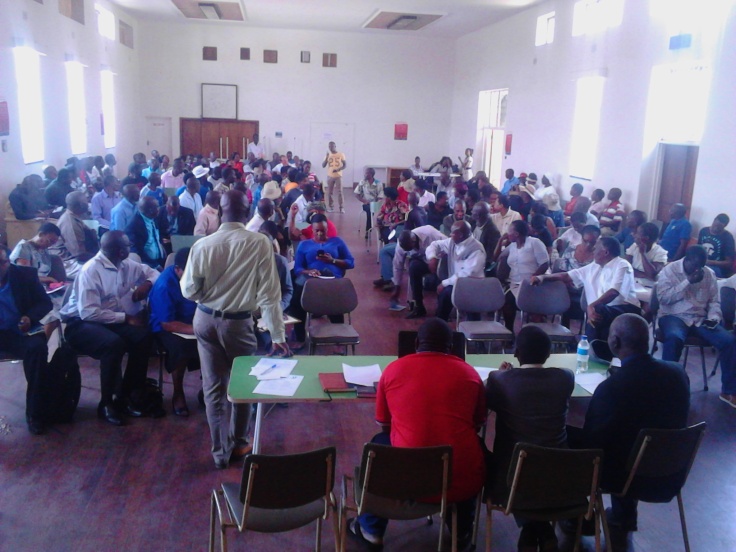 The Christians that were mobilized by Church Leaders and two other Christian organizations resolved to defy the National Pledge and called on the Minister of Primary and Secondary Education to STOP the pledge forthwith.
The meeting resolved to circulate a petition against the pledge, take the issue to the Constitutional Court as well as mobilize Christians and other citizens for a boycott of the Pledge and a City wide prayer and fasting meeting.
The meeting was also attended by Heads of Christian Denominations, Civic Activists, Lawyers and legislators from the City.
It what is set to be a showdown stage between the Christian community and the Minister of primary and Secondary Education, Christians resolved to explore all legal and peaceful means of ensuring that the pledge is stopped as it violates their religious freedoms and constitutional rights.
According to prominent Bulawayo Human Rights Activist Dumisani Nkomo who spoke in the meeting, the National Pledge violates Sections 60 of the Constitution of Zimbabwe that deals with Freedom of Conscience.
Abammeli Human Rights Lawyers Network Representative Mr Tineyi Mukwewa also recognized that the Pledge violates also section 81 of the Constitution and urged the parents to flood the Constitutional Court with cases against the pledge.