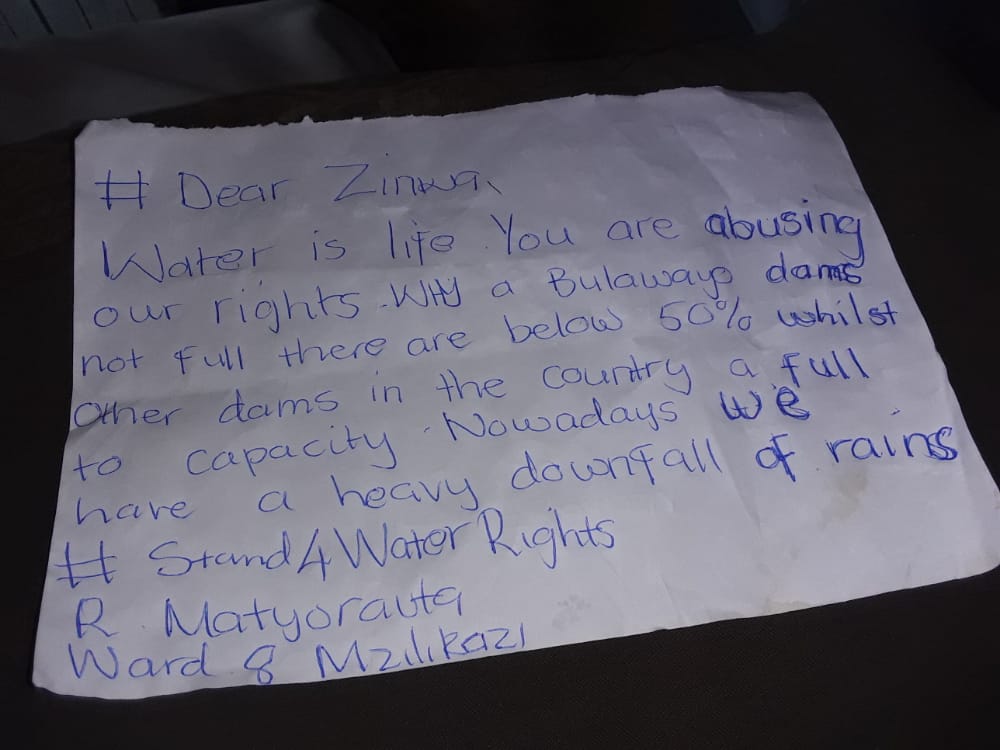 That Bulawayo and Matabeleland South province have been receiving torrential rains since January is evident to everyone. That most dams nationally are full and spilling (including the largest inland water body – Tugwi – Mukosi), is very clear to all and sundry. But the biggest question is why are the Bulawayo supply dams still tottering at half to below half capacity?

On the 2nd of February 2021, Matabeleland Institute for Human Rights sent a Submission Paper to ZINWA where key among the questions residents of Bulawayo sought answers for was why the Bulawayo supply dams are not filling up. On the 7th of February another submission paper was handed to Bulawayo City Council and the residents continued to seek answers on the same question.

The only attempt closer to a response have come from some Bulawayo City Council officials who have argued that the fact that it’s raining in Bulawayo doesn’t mean in the supply dams catchment areas it’s also raining. However, there is evidence that the catchment areas are also receiving rains. So where is the problem?

In this opinion article, I will therefore seek to point out some issues that may be the contributing factors which they need to quickly investigate:

There is need to quickly investigate if the catchment areas of our supply dams are not oversubscribed with weirs and smaller dams that are eventually affecting the receiving capacity of our major supply dams. Once the catchment areas are oversubscribed with smaller dams and weirs, it means the dams downstream will suffer as less water will reach them.

How the catchment is managed may also be a key contributing factor. Are the streams and tributaries within the main river basin not blocked or illegally diverted into private dams? Are they not illegally closed by stream bank and river cultivation and illegal gold artisanal mining activities? Are there no agricultural activities that are flattening the basin areas and thus limiting the scale and speed of runoff? Are there no illegal (consciously or subconsciously) runoff arrest or diversion activities happening in the river basin?

The authorities need to further investigate if there are no disused mine shafts that are now collecting water underground where instead of runoff or streams flowing to the river, they now flow into these disused shafts. These shafts may also have the net effect of reducing water running off into dams as they will need to fill up first and then only when they are spilling will the water flow into dams.

There is also need to investigate if there are no disused or active mine shafts that are syphoning water underground the rivers or the dams. Once the mining shafts are dug towards the dams sites, they also have the capacity to syphon water from underground through underground leakages or leaching. This also has the capacity to continually deplete dam levels.

It also needs to be investigated where the Bulawayo storm drains are channeled to. Bulawayo is the watershed area. From Bulawayo, Matabeleland North rivers flow westward and Matabeleland South rivers flow Eastward. Our Bulawayo supply dams are on the eastward direction. If the Bulawayo storm drains are channeled towards the west ward direction that means they are not aiding our dam supply rivers but they are aiding the rivers that flow westward which do not assist our supply dams at all.

A joint operation involving ZINWA, EMA and Bulawayo City Council is very important in addressing these critical questions. Finally, an honest and objective examination of these factors may be the solution to the question of why Bulawayo supply dams are taking ages to fill up.

(Khumbulani Maphosa is a human rights defender, the Coordinator of Matabeleland Institute for Human Rights and the current Secretary for Bulawayo Water Action. He is contactable on maphosakhumbulani@gmail.com )